skip to main | skip to sidebar

TONITE At the ELK gallery 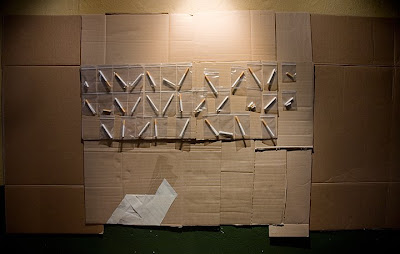 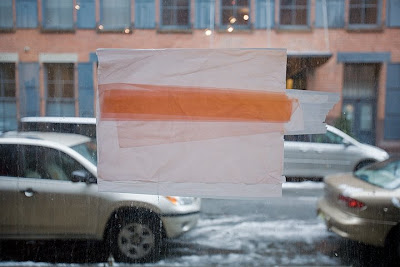 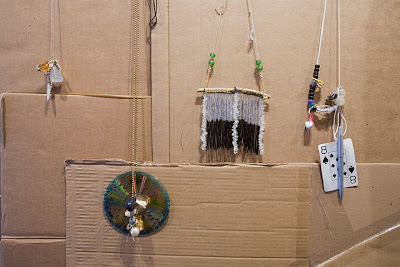 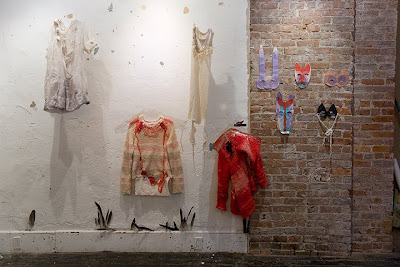 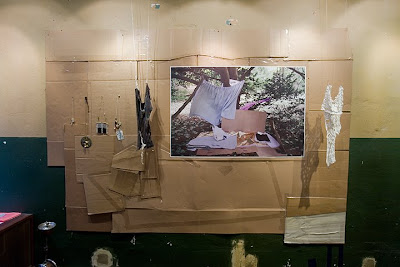 “Insieme” is a one-night presentation of Desirée Hammen’s intermingling of
art, vestment and jewelry shown hand in hand with discarded items found on
the street and documentary evidence of improvised social interaction.
Hammen’s sleeping pod made of cardboard, white pillows, a purple sash, a
green curtain and a gold sheet installed in Arnhem’s Mariendaal will be
represented photographically in counterpoint to her handmade sweaters,
dresses, necklaces and repossessed bird feathers. Also on display are
traditional bobbin lace works inspired by the tiled patterns of the
Miromesnil Metro station in Paris, rendered under the tutelage of New
York-via-Brussels sensei Marie Rose Delahaye. These painstakingly
handcrafted components of future attire provide a contrast to the spirit of
sidewalk detritus that informs and animates much of Hammen’s earthy and
intuitive couture, clothing that responds to reality as opposed to dogmatic
notions of “fashion.” Masks from an “Animal Farm” action at a birthday party
last summer in Mölnbo, Sweden will be shown, which by way of concealing
their wearers’ faces strive to disclose the inherent animal within. These
wearable art creations are arrayed around a crooked and weathered ten-foot
long stick discovered near Smith Street and W. 9th in Red Hook, Brooklyn, at
a liminal space it occupied with a mattress and other castoffs that
constitutes a King’s County doppelganger of the homeless-cum-chic bed
environment in Arnhem. Knowing it was a find since there are so few
substantial stray branches in New York, Hammen scoped it out for weeks, then
dressed it in a one-of-a-kind sewed coat “skin” before leaving it at its
original location to marinate on its way to becoming a sculpture at the
gallery. Fineness and grit mix effortlessly in these works, as does the
social and private and a yearning for clothes to reflect the true self. This
is art and raiment as unexpected surprise, complimenting the meditational
gratification of lace embroidery with the action, reaction and randomness of
unscripted social discourse. The magic of peoples’ stories heard and
incorporated into a stand-alone multi-disciplinary practice is especially
manifest in the collection of single cigarettes caged during short and
usually friendly interactions with strangers (“People who have the package
in their hands are the best”) that will be exhibited. An ethos of sharing,
trash appreciation, and exquisite craftsmanship comes together, and the
ad-hoc sleeping arrangements and often recycled materials so integral to
Hammen’s oeuvre are mirrored on the walls covered with cardboard and linen
and various bits of tape strategically placed on the floor. Also on view
will be Hammen’s films of birds flying in formation, Halloween parties, and
litter being buffeted by the wind. The evening will include musical
performances as well as interpretive hula dancing. A full-color, forty-page
catalogue published in conjunction with “Insieme” is available from Elk
Books.


Desirée Hammen was born in Breda, the Netherlands, in 1976, and studied at
the Artez Institute of the Arts in Arnhem. Besides working as an artist,
fashion designer and stylist, she has showed her creations at shows
organized by Ekovaruhuset/House of Organic in New York, and also with
Ekolab. She is a specialist in gold embroidery, and a member of the Dutch
collective Painted, in which along with core members Saskia van Drimmelen
and Margreet Sweerts she is involved with learning handcrafted techniques
that are utilized in collaborative projects realized in a sequential
back-and-forth between Holland and Bulgaria. This is her first exhibition in
New York.

Made possible by the unerring support of BLOOD
Gepost door Desirée Hammen op 07:59